Through Her Eyes: The U.S. Supreme Court’s Dobbs Decision

Ed. note: This is the latest installment in a series of posts on motherhood in the legal profession, in partnership with our friends at MothersEsquire. Welcome Sam Sliney back to our pages. Click here if you’d like to donate to MothersEsquire.

Through my lawyer eyes … I am saddened by the actions of an institution that I held in extremely high regard. An institution that I trusted with all my being to do what the law demands even when what the law demands conflicts with the justices’ personal, political, and religious beliefs. An institution that was supposed to protect those not in the majority: the minority and persons of color who will be most impacted by this horrific injustice. The minorities who were not recognized under the law at the time of the U.S. Constitution’s ratification. Minorities who were relegated to “less than” under the law. I am astonished that the Supreme Court looked far back into our nation’s tarnished history to rationalize its decision that the right to choose is not “deeply rooted” in our nation’s history, and, therefore, not worthy of being protected by our nation’s highest court. A history that, at its inception, left women with no rights except to be the property of the men that “owned” them. A history that viewed persons of color as less than the white men who drafted and ratified our Constitution. I am startled by the attack on substantive due process and the blatant disregard for legal concepts like stare decisis. I am afraid for the future of other fundamental rights previously protected by this Court but that somehow now hang in the balance of a rogue Supreme Court that has chosen to attack the little progress we have made over the past 50 years. Rights like the right to contraceptives, to have sexual relations with whomever we choose regardless of gender, and to marry whom we choose regardless of race, sexual orientation, etc.

Despite what the majority opinion states, Justice Clarence Thomas in his concurrence shows what I believe to be the true intentions of some members of the Supreme Court. He says:

With this threat, every woman, person of color, and LGBTQ person should be fearful of what the future might hold. I am disgusted at the majority’s ignorant statements that if women feel strongly about the right to bodily autonomy, they can seek justice through the legislative process by running for office or voting — two things that women have been doing for years. But, yet, here we still find ourselves. The excuse to “use the  legislative process” to justify stripping this right from women is cowardice and ignores the stark reality that women face barriers to fully taking advantage of the legislative process in the first place as evidenced by the fact women could not vote until 1920, some 132 years after the U.S. Constitution was ratified.

Through my woman eyes … I am outraged that a group of men (minus the one woman) — men who are not compelled under any law to carry a child against their will or have any of their reproductive rights infringed upon — created a reality that sets women back hundreds of years. As famously stated by the late Justice Ruth Bader Ginsburg, “I ask no favor for my sex. All I ask of our brethren is that they take their feet off our necks.” Through this act, the Court has placed its feet back on the necks of every women. I never imagined that this would be done by our nation’s highest court.

I am outraged that having three women on the Court was not enough and that one of those women was in the majority decision. A woman who should understand the impacts of forcing parenthood on someone who is not ready for such a responsibility. A woman who has children of her own. Did she ever stop to think that she was stripping herself and her daughters of a very fundamental right to being a woman: the right to autonomy over their own bodies? Did she ever consider that she was making herself and her daughters less than what they had been before the June 24, 2022, decision? Did she ever consider the fact she might one day have to look one of them in the eye after her daughter was a victim of rape and tell her she must carry her rapist’s child? Did she ever consider she might one day have to sit by her daughter’s side as she grieves the child she is carrying that is not compatible with life but with no option to end the child’s suffering prior to natural labor and delivery? I cannot imagine that she asked herself any of these questions before stripping away a right afforded to women over the past 50 years.

I am saddened by an institution that is targeting the very fundamental rights that women and minority groups have fought for over the past 100 years. Rights that people have lost their lives over. Rights that ensure the American dream for people who do not identify as a man and white.

Through my mother eyes … I am saddened that an already overburdened foster care system will likely experience an overabundance of unwanted children in the next decade. My heart breaks for the children who will be enslaved to this broken system.

I am shocked that my children now live in a world where women have less rights than they did when my children were born. When I decided to have children, I did so under the presumption that whether I had a boy or girl, they would both have equal rights to autonomy over their bodies. In no world did I imagine I would be raising a daughter with fewer rights than my son or that my son would live in a world where his sister was seen as “less than” under the law. I fear for what the future might hold.

As we see individual rights eroded by the Supreme Court, I wonder what else is to come? What other injustices will be inflicted upon my children? What other rights will be stripped away from them? Will my son not have the choice to decide freely who he decides to love regardless of race or sexual orientation? Will my daughter have adequate access to contraceptives to aid her in managing her own reproductive health? When I am asked why this happened, what will I tell them? At this moment, I am not sure how to answer that question. And while it will likely be a while before I have to answer since they are 4 and 2 years old, what I do know is this.

I will tell them their mother will continue to fight for justice for all. Equity. Accessibility. And most importantly for those who cannot fight for themselves. I will tell them the importance of doing the right thing when it seems like an impossibility with the odds stacked against you. I will tell them how women fought for more than 70 years to be seen as “equals” to men, fighting for the right to vote. I will tell them that, sadly, all women have ever known is fighting. Fighting to be seen as free and equal citizens under the law. Because of this, we are uniquely accustomed to what is required here. We will continue to fight as our ancestors did before us. It will take time but we will not give up. This injustice will be undone.

Justice Ginsburg provides in her 2016 memoir, “My Own Words,” as she recalled the right to abortion after the Supreme Court decided Planned Parenthood and the state of activism in the United States:

The latest decision may have the sanguine effect, however, of contributing to the ongoing revitalization in the 1980s and 1990s of the political movement in progress in the early 1970s, a movement that addressed not simply or dominantly the courts but primarily the people’s representatives and the people themselves. That renewed force, one may hope, will — within a relatively short span — yield an enduring resolution of this vital matter in a way that affirms the dignity and equality of women.

While the “enduring resolution” she spoke of has not come to fruition yet, her inspirational words add fuel to the continuing movement across the United States to “affirm the dignity and equality of women.”

Ginsburg said, “Justices continue to think and can change … I am ever hopeful that if the court has a blind spot today, its eyes will be open tomorrow.” Let her words spark a fire in us all. Let us endeavor to open the “eyes” of every court and state and federal legislature. Let us open the eyes of every person who does not understand the gravity of this decision and importance of a woman’s right to choose. We have no choice. Our children, families, and all of our descendants are depending on us to act. Other women and minorities are depending on us. Let us bravely step into the battlefield steadfast in our ideals and devoted to our cause. We have done it countless times before with success. We will not stop until this country recognizes every citizen regardless of gender, sexual orientation, race, or ethnicity as free and equal citizens under the law. 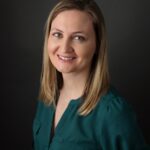 Sam Sliney is a mother of two and wife to an Army Green Beret. Since 2014, she has served in the U.S. Air Force as a Judge Advocate (JAG). She is currently assigned to a Special Operations Forces (SOF) unit where she provides legal advice on a wide array of legal issues to include operations and international law. Sam is passionate about creating an inclusive Department of the Air Force and Department of Defense to increase lethality of the joint force. Specifically, she advocates for equitable support and accessibility for women during all phases of womanhood, particularly pregnancy and post-partum.

Harvard Law Professor Argues That The Supreme Court No Longer Cares About Its Own ‘Legitimacy.’ What Now?

Is it Legal to Break a Hot Car Window To Rescue an Animal?