Everywhere you turned this year, Jonathan Turley was there.

The George Washington University law professor continued his all-consuming passion to stay relevant with countless cable news hits, a flurry of vacuous articles in The Hill, and an unfiltered string of Tweets and personal blog posts. Wherever a far-right talking point needed the imprimatur of a fading scholar, Turley jumped at the opportunity to spout all manner of nonsense to get another taste of that sweet, sweet attention.

He’s the legal equivalent of a down-and-out doctor writing oxy scrips in exchange for the hard stuff that he really craves. Here’s some quasi-intellectual analysis of how John Durham is going to take down Hillary Clinton in exchange for 5-minutes on Hannity.

AHHHHHHH! Take a deep breath and ride that high, buddy.

In any event, as we close out 20-Turley-2, let’s look back on the professor’s greatest hits. Mostly because I’d even forgotten some of these gems from the past year.

When Canada threatened to clamp down on the handful of truck drivers obstructing traffic to protest COVID restrictions, Fox News needed someone willing to concoct a legal defense for the anti-vaxxers. Turley stepped up to the plate.

Two Turls right out of the gate for opining on Canadian law without stepping one inch — or centimeter — outside the First Amendment. Another couple of Turls for failing to grasp that “yes, they can arrest you for this” was a core part of the Civil Rights movement’s strategy. Turley even uses the phrase “good trouble” in the interview without a spark of recognition over what “trouble” means.

But achieving a perfect score requires something special. Anyone could cynically claim that another country can’t make public disturbance arrests based on U.S. law that — coincidentally — would also have justified those arrests. It takes another level to rewrite history and stir up the MAGA audience with a new coat of whitewash on their imagination of MLK as some sort of proto-Herman Cain.

“They could have arrested Martin Luther King.” Brilliant.

A Democratic nomination to the Supreme Court is a 4-alarm fire at Fox and the concept of a successful Black woman is basically the Towering Inferno. Obviously, Turley is a cable booker’s first call.

Two Turls for hypocrisy as Jackson’s years of service on the federal judiciary more than matched Amy Coney Barrett’s work, yet Turley made the talk show rounds for ACB explaining that her judicial philosophy was abundantly clear. Another two Turls for the “just asking questions” frame, the master level whistle silencer.

Turley’s entries in the genre aren’t… all that exciting.

Citing the academic imperative to squelch protest? Check. Bemoaning anonymous students who don’t like it when they get mocked for being stupid? Check. Misuse of the heckler’s veto? Check. Comparing students uninterested in right-wing seminars to the Reign of Terror. Check, check, check.

But where’s the commitment to the bit? Volokh is out here explaining how students can’t possibly learn if he’s not able to use the n-word in class. Amy Wax is inviting white supremacists to class. Judge Ho is cooking up fake boycotts so Yale Law can go full Orwell. Turley’s just not in the game when it comes to free speech takes.

He gets a bonus point for calling Above the Law “one of the most vocal anti-free speech sites on the Internet.” We appreciate the comedy.

Twitter: The EVEN GreateR-Est Free Speech Crisis Of Our Time — 3 Turls

Turley tried to salvage his right-wing free speech gravitas via the Twitter takeover, but Elon Musk’s Twitter tribulations flummoxed the professor. He desperately wanted to expand his simping empire to include an honorary post as Chief Twit’s Twit, but too many rivals came for that throne.

Turley tried though. His claim that private companies choosing not to advertise on Twitter amounted to a grievous blow to free speech — a claim he made DURING THE WORLD CUP and all the actual speech crackdowns surrounding that — generated a little conservative excitement. He’s also lent his voice to the conspiracy theory that not posting Hunter Biden’s dick pics amounts to a constitutional crisis.

But his work in this area is mostly bland. That’s not going to cut it with an audience looking for someone to match the spectacle of Musk’s own bad legal takes or get him noticed ahead of Bari Weiss and late-stage Matt Taibbi.

Even when limited to purely academic analysis, Turley got outcrazied by these two nitwits and their “what if Delaware corporate law didn’t exist” piece in the Wall Street Journal.

Frankly, Turley would only have one Turl on this but for his pathetic “no one took me seriously enough for a blue checkmark but now I can buy one!” post. Hyping up verified marks like they’re some kind of golden ticket and casting legacy Twitter as a censorship machine because it didn’t find Turley’s decades-past-its-prime career worth verifying.

After the Dobbs decision, multiple GOP-led states started learning for the first time that the symbolic abortion legislation they’d written to juice fundraising for years would actually put women in grave peril.

But Turley offered his “credibility” to soothe the consciences of any conservatives out there second-guessing the wisdom of a legal regime that forces 10-year-old rape victims to give birth or encourages miscarrying patients to bleed out. According to Turley, the laws in these states wouldn’t really prevent that sort of treatment, and he based this analysis on… nothing.

“It is doubtful the courts would ignore.” Well, based on that rock-solid grounding, I guess women should just breathe easy! While Turley handwaves away all the states that don’t have explicit ectopic caveats, he ignores that medical professionals he’s talking about hypothetically are in reality confused as to the scope of the exceptions.

It doesn’t matter if the government would actually prosecute in these cases — they will — because the fear of prosecution is enough to trigger the harm. It’s a fallacy he pursues with some vigor — he also tried to pawn off abortion gag laws as a non-event based on his wish-casting that prosecutors will just ignore the statutes they fought to create.

He went on to offer a bunch of WebMD level analysis about how mifepristone and misoprostol work while ignoring methotrexate, but we digress.

Turley doubled down on his abortion argument, arguing that the 10-year-old Ohio case was fishy because he decided she would be covered by Ohio law.

Turley also lent his name to misrepresenting the whole course of the Trump warrant. Per earlier coverage:

He then adds that even if Trump was hoarding classified documents, “the question still remains: why couldn’t you have done that with a less intrusive means?” THEY DID. The DOJ went to Mar-a-Lago and removed 15 boxes back in January! THAT was the less intrusive, negotiated effort. And when the DOJ had reason to believe Trump still had multiple boxes of sensitive material beyond that — either from additional investigation or because the Trump team affirmatively told the FBI it would withhold the rest of the haul — then the DOJ had no choice but to seek a warrant to get the material directly.

Missed the perfect score by failing to argue that stealing a couch was worse than the nuclear codes. Rookie error.

But he doggedly stuck to defending Judge Aileen Cannon’s comical effort to derail the investigation despite objections from known pinko commie firebrands like Bill Barr and Above the Law hater 11th Circuit Judge William Pryor.

He also twisted the basics of criminal law to suggest Merrick Garland had an obligation to tell the target of an ongoing investigation everything he has before seeking an indictment. While it would be a great legal development for mob kingpins, it is not actually how any of this works.

As we noted at the time, Turley’s analysis isn’t entirely wrong, it just cherry-picks among the broadside of allegations surrounding Trump’s actions:

By leaning into the talking point that this is all just mean talk about Trump, Turley’s relying on what can at best be characterized as “legalish” thinking. Generally casting aspersions on the election process isn’t a crime! Conspiring with fake slates of electors and trying to convince the Vice President to hijack the Constitution… would be. Criminal liability for incitement is, correctly, a wildly high hill to climb! Using public office to obstruct a response that put lives at risk… makes for a different story. Campaigns can use all sorts of puffery without being illegal! Making up “funds” to raise money for lawsuits while always intending to funnel the money to yourself and your cronies… well, you get the idea.

Everyone has an off day. Turley resolved to do better the next time he discussed January 6.

Testimony from the January 6 hearings alleged that the Secret Service refused Trump’s demand to be taken back to the armed mob. This is an entirely reasonable decision and well within the mission statement of the Secret Service.

But that sort of sober analysis isn’t going to get a law professor on TV! 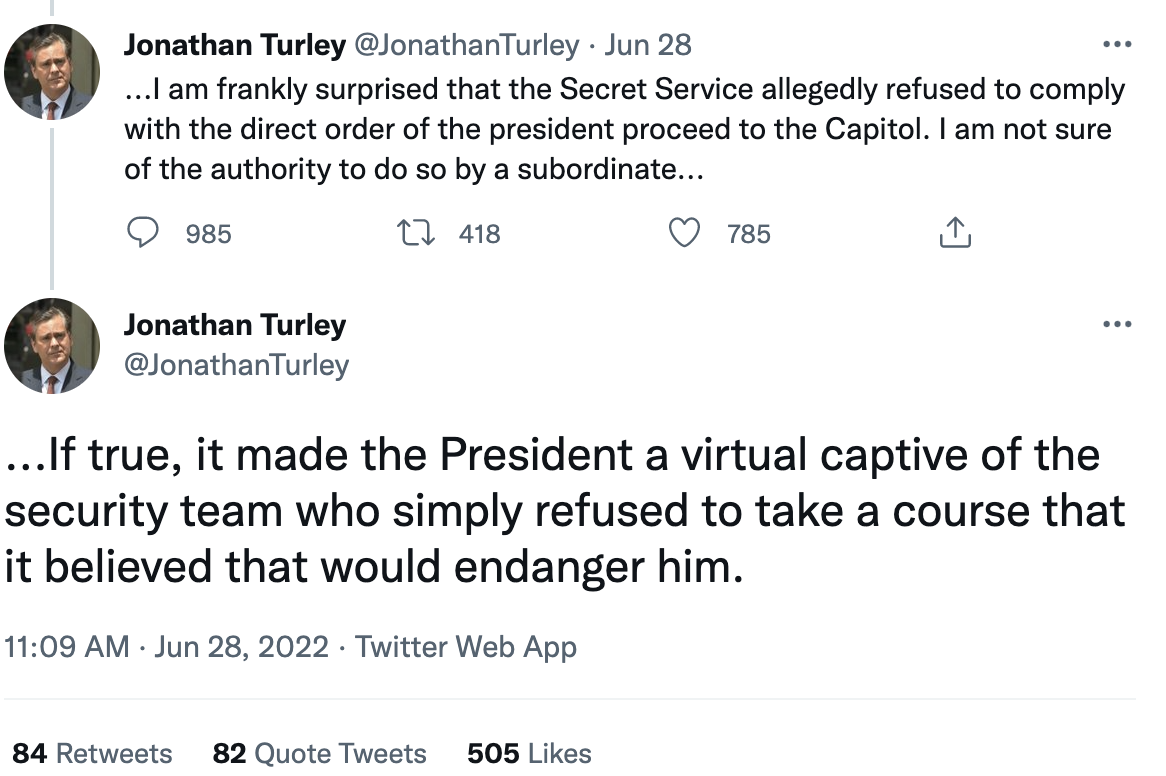 In a subsequent article that is currently unavailable online, Turley wrote that “In the end, the security team was correct on the merits but probably wrong on the law.” It will not surprise you to learn that, in fact, Turley is wrong on the law.

As explained in our earlier article:

Three Turls for being wrong. But a perfect score for going the extra mile to tell an audience of insurrectionist sympathizers that the Secret Service was violating federal criminal statutes.

We’re not even getting into his detailed effort to rewrite the GOP’s Midterm collapse as a win for his fans, an effort better handled in Robert Weisberg’s What Happened To Jonathan Turley, Really? piece.

What will the next year of Turley bring? I, for one, am excited to find out!

(But it’s going to be a lot about Hunter Biden’s laptop.)

After a year of turmoil for the court, Roberts lauds judicial-security measure

After a year of turmoil for the court, Roberts lauds judicial-security measure

How I Made General Counsel: ‘The Legal Department Is Not the Department of “No,”’ Says Margaret Minister of Evisort

The morning read for Tuesday, Dec. 27

Which law school got two No. 1 rankings by Princeton Review?

Disbarred lawyer and estranged husband of ‘Real Housewives’ star is charged with stealing $18M; is he competent for trial?