‘Girls Can’t Get Rich Playing Sports,’ And Other Reasons I Became An Attorney

Ed. note: This is the latest installment in a series of posts on motherhood in the legal profession, in partnership with our friends at MothersEsquire. Welcome Jaclyn S. Alcantara to our pages. Click here if you’d like to donate to MothersEsquire.

My husband is eager to take our fourth-grade daughter to attend her first soccer game, because our hometown of Kansas City finally has a professional women’s soccer team. He is excited for her to see female representation in professional sports. It’s something I honestly had never given much thought to. Unlike my male peers, a career in sports never once crossed my mind as a girl growing up in the ’80s and ’90s.

I didn’t view sports as a realistic path to scholarships, fame, and fortune, so I threw myself into academic pursuits instead. My dedication paid off, and I received sizable academic scholarships to help pay for engineering school. I chose engineering because my mom’s best friend since high school was an electrical engineer. It was a career that paid well enough for her to afford a nice house, a boat, and a family trip to Disney World every year. “I’m good at math. I could do that,” I thought.

When I started engineering school in 2000, I was one of only a handful of women in the electrical engineering and computer engineering programs at the University of Miami. I recall having only one or two female engineering professors during my entire four years in the program. My male classmates were generally nice, and I never noticed any overt sexism directed my way. Nevertheless, I felt awkward, out of place, lonely, isolated, and unhappy in engineering school.

I still finished the program, graduating with honors, while simultaneously plotting my immediate exit from the profession. One of my female engineering professors taught a “Writing About Science” course, and I was intrigued. I wrote for several industry magazines my first few years out of college before stumbling upon a job ad for a “patent agent,” requiring both an electrical engineering degree and writing experience. It was a perfect fit. Being a patent agent required me to become a combination technical expert, writer, and legal expert, drafting and prosecuting patent applications before the U.S. patent office. It was challenging, engaging, and paid relatively well. I also appreciated that the intellectual property law firm I joined had a good mix of men and women among its attorneys and patent agents.

Still, after nearly a decade in the field, I was ready to take on new challenges and admittedly grew a little tired of trying to explain to people what I did for a living. While my male coworker who was also a patent agent would occasionally be mistaken for the attorney, I was more likely to be asked, “So you’re like a paralegal, right?” Just as all women in medicine are too often presumed to be nurses, the underrepresentation of men as paralegals and legal assistants results in similar assumptions about women in law.

To eliminate any confusion about my technical and legal credentials (and further my career), I decided to become a patent lawyer. By this point, my husband and I had a young daughter at home and a mortgage to pay. The prospect of returning to school full time as a mom in my mid-30s felt a little daunting, but I knew it was possible because I had witnessed my own mother return to school in her late 30s. I reasoned that if she could earn her undergraduate and then graduate degrees while raising three kids, maybe I could make it work too.

Upon graduation and passing my state bar exam, I took a Biglaw job at a firm with a woman at the helm for the first time in that firm’s 150-year-plus history. There I met numerous lawyer moms managing some of the firm’s largest clients. When I later accepted an amazing offer to return to my previous intellectual property law firm, the number of female partners there had grown exponentially since a decade and a half earlier when I had started there as a patent agent.

These women continue to inspire me as I reach for the next rung on my career ladder, and I hope that my career path will inspire someone else. There is still much work to be done when it comes to diversity and inclusion within law and STEM fields alike. I am in a position today to help do that work only because of the trailblazers who became that representation that I needed to see.

When I look at the gains made by women in the legal profession and professional sports alike over the past few decades, I feel so hopeful for my daughter’s future. The norm for her growing up will be watching women make a living playing sports, running for office, becoming doctors, becoming engineers, or becoming lawyers, like her mom. Seeing women in traditionally male-dominated sports and careers may not change her entire life trajectory, but I know from experience that it can. My hope is that her life is less defined by a lack of female representation and more enriched by its abundance. 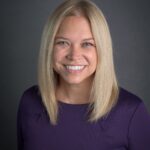 Jaclyn S. Alcantara is an associate patent attorney at Hovey Williams in Overland Park, Kansas, specializing in patent prosecution and counseling. Her practice focuses on U.S. and foreign patent matters in the areas of electrical, mechanical, aerospace, manufacturing, and software technologies. She holds a Bachelor of Science in Electrical Engineering from the University of Miami. More about her legal practice can be found on her firm bio page and she can be reached by email at jalcantara@hoveywilliams.com.

The morning read for Thursday, Jan. 12

The morning read for Thursday, Jan. 12

Working Smarter | Working on Not Being a Workaholic